This year the entire Yarra Junction campus of Yarra Valley Community School (YVCS) have enjoyed many memorable moments, with two of the standout highlights being the Great Billy Cart Races in Warburton and the Human Hungry Hippos at St Joseph’s Primary School hall.

The Billy Cart Race began with a process of each year level designing and building a cart together for their class. OH&S issues were discussed and strategies implemented for both the building and racing phases. The building, planning and deployment of the races were all used as a part of the student’s learning requirements and outcomes for the Work Related Skills Strand.

When Race Day rolled around, so did the bad weather, but this did not deter the students. Their carts were all painted up with team racing colours, with some students donning gear to make them race faster and everyone was debriefed with the aim of the game: to beat the clock, not each other.

The weather created some slippery surfaces and a few rather hilarious stacks. Thankfully no one was injured, due to the protective gear that was compulsory to wear if the students wanted to give the carts a go. The teachers and staff were very pleased to see the students contributing to the various tasks such as pushing, carrying, supporting and, of course, laughing. Another great sight to see was everyone working well as a team.

A particular race day highlight was when student, Stephanie, unveiled her racing costume. Stephanie dressed as Mario from Super Mario Bros., complete with banana peel! Her first race ended in a stack, banana peel included, but she blitzed her second trial, winning her the title of fastest video game character of the Great Billy Cart Races of Warburton!

“This whole assessment was very enjoyable, including the planning and the building of the billy carts, and the culmination of racing them in the rain on Race Day. I’d say it was probably the most enjoyable assessment we’ve done all year!” Lachie McKenzie – Foundation VCAL student

The second memorable event held by YVCS was a game of Human Hungry Hippos. This event was held at St Joseph’s Primary School in Yarra Junction, who kindly offered the use of their hall to stage this human size game of the kids’ board game Hungry Hippos, yes that’s right human sized game.

YVCS students prepared for the game over the weeks leading up to the event, making trolleys, allocating roles and planning the running of the activity. They had to put into consideration any potential OH&S issues that might arise from the activity and work on strategies to minimise the risks associated with these potential issues.

On the day the students split into their teams, with some people lying tummy-down, helmets on, on the carts as the nominated ‘hungry hippo’, while others pushed the carts into the centre of the hall, where the ‘hippos’ could gather balls. The team members then hauled their ‘hippo’ and stash of balls back to their corner of the hall. The objective being the team that hauled the most balls back to their station won the game. This proved to be one of the most popular activities the kids participated in with loads of laughter and big smiles had by all.

If you don’t know what Human Hungry Hippos entails, have a look at the game being played on YouTube! Thank you to St Joseph’s Primary School for the use of their hall. 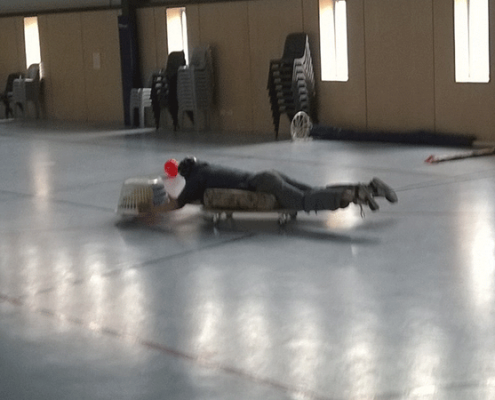 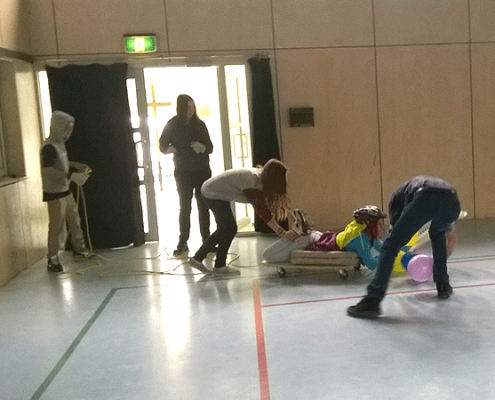 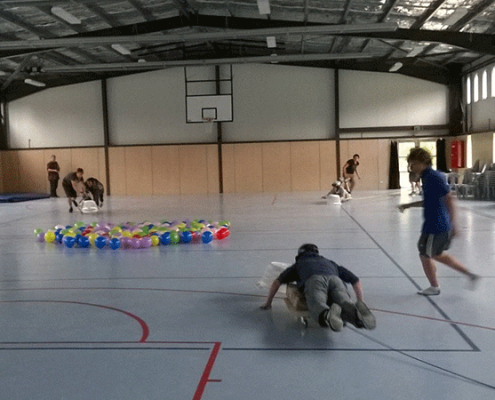