You are here: Home1 / Blog2 / celebrations

Moira Burgi, a valued Cire In Home Care client, celebrated her 100th birthday on Monday 25th July 2016.  Moira is the only grand-child remaining of the original Burgi family, the first settlers in the Wandin district.

Celebrations for Moira’s centenary began with a special mass for her on Saturday 23rd July at her Catholic Church in Lilydale where not only she, but also her mother was Christened. This was followed by a celebration of Moira’s milestone with a gathering of over 150 family and friends at the Gruyere Hall on Sunday 24th July.

“It felt like it was happening to someone else, not me.  It was such a lovely day, I spoke to so many people and it will take me a long, long time to read each of the cards.”  Moira speaking about her celebrations

Johann Burgi, Moira’s grandfather, was a German-speaking Swiss man who came to Victoria in 1854.  He met and married Mary Tyne in 1864, an Irish immigrant from Tipperary, Ireland.  They had 10 children: the second born in 1866, was Edmund, Moira’s father.

In that year Johann had been experimenting growing tobacco on Sam de Pury’s property in Lilydale.  It was at this time that land in the Wandin area was surveyed and made available. Johann selected Lot No.1, a heavily timbered and completely undeveloped area on the corner of what is now known as Burgi Hill Road and Victoria Road.

He set to and cleared enough land to build what he described as “a good comfortable hut” and moved there on May 11th, 1867, bringing his wife and 15 month old son Edmund, Moira’s father with him.

Edmund, in turn, married Mary Lily Kiernan.  They built a house in Victoria Road where Moira was brought up with her two brothers, Bernie and Eddie.  This house is still Moira’s home to this day.

Life was very different when Moira was a child.  She couldn’t recall having any toys – just a paling through the fence for a see-saw and a farm pony to ride.  There were few other children around for herself and her brothers to play with except for their three cousins from Lot 1 John, Mary and Nancy. Church was an hour’s drive away in an open jinker, but Moira’s mother made sure the family never missed a Sunday.

Moira was at school at the convent in Lilydale from the age of 7 years and up until she was 15 in 1931.  Ten years later she trained as a mothercraft nurse and worked with many families in Victoria and interstate.  This was followed by more than a decade in the office at Belloc House in Kew.  In the mid 60’s, she returned home to Wandin to care for her mother full time.

Moira’s father Edmund was the first European child in Wandin.  He and Moira, between them, have seen all of Wandin’s development since.

“Today there are roads, churches, sporting grounds, schools, shopping centres, cars and all sorts of motor vehicles, iPods and mobile phones.  Imagine life in 1866, no running water, no power, no refrigeration or air-conditioning, no phones, no cars, no public facilities, no schools, no glad-wrap and the ‘local’ priest was in Heidelberg! We have certainly come a long way in my 100 years.”

Moira has been a client of Cire In Home Care for a number of years now, and credits her being able to stay in her family home with the expert care and assistance she receives from her carers.

“Thank you so much for all your assistance.  Without your help, I would not have been able to remain in my own home for so long.”

We finish this article with a couple of quotes from Moira.

“Thank you for helping me celebrate my very special birthday”.

“The past is just a memory away…”

UYCH Children’s Centre celebrated Lunar New Year on Monday. Being China’s biggest ceremonious holiday our centre was an abundance of activity all inspired by Asian culture. Traditional stories were told about the importance of families getting together to prepare for good fortune. On that note the children sang a Lunar New Year song about just that, good fortune called Gung Hay Fat Choy.

The benefits of music and movement
As described in the Creative Curriculum for Preschool Children by Diane Trister Dodge and Laura J. Colke. Children naturally love music! Whether it’s soft and soothing or a lively tune, children feel it both physically and emotionally. Throughout the early years, children are learning to do new things with their bodies. Young children are also learning that movement can communicate messages and represent actions. They begin to learn about the world by acting on objects and people, and they “think with their bodies” well before they think with words. This is why body movement is not only fun for children but also a good opportunity for them to solve problems. Singing or chanting can help make routine activities and transitions such as gathering children into a circle or group activity, smoother and more enjoyable. Music helps to set a mood. Quiet, soothing music calms and relaxes children, while a lively tune rouse them for energetic clean up time.

Music and movement are also social activities that help children feel part of the group. As children grow in their appreciation of the beauty of music and dance, they acquire a gift that will bring them great pleasure. Music brings another dimension of beauty into our lives. Music and movement benefit a child’s development in many ways.

UYCH kinder programs embrace this methodology by having a dedicated Music and Movement Coordinator, Toula who taught the children a dance using scarves and fans. Combining cultural props with music the event was a great way for the children to creatively express themselves. With scarves

flowing and many smiles on their little faces you could tell enjoyment was had by all.

Activities like these are a great opportunity for the children to engage in cultural experiences, here are what some of the children had to say:

“The words in the song were really good” – Grace

“I liked the red fan” – Bailey

The Children Centre would like to thank Helen from the Yarra Junction Op Shop for her generous scarves donation.

Community football teams call on the community to show their support for diversity and inclusion in Aussie Rules.

Join in the celebrations this Sunday…

Pride Cup started in 2014 with the aim of celebrating inclusion and diversity in sport. The event was held off the back of local Yarra Glen footballer Jason Ball publicly coming out as gay and highlighting the challenges that LGBTI people face in feeling safe and being themselves in a sporting environment.

Warburton Millgrove will take on Yarra Glen in the second annual Pride Cup – to celebrate diversity and inclusions in sport.

These two teams have thrown their support behind the 2015 Pride Cup, which celebrates and recognises diversity and inclusion in sport for lesbian, gay, transgender, bisexual and intersex (LGBTI) communities and are calling on the community to do the same.

“Diversity and inclusion for LGBTI people needs to start in our community sports and it is important that we all get behind it,”
Vinny Erickson, president of the Yarra Glen Football Netball Club, the 2014 Pride Cup Champions.

The Yarra Glen Football Club will this year have former Carlton footballer and Pride Cup ambassador Brock Mclean playing on their side.

There will be a range of football and netball games that will be played during Pride Cup, ending with the senior football Pride Cup at 2.10pm. The presentation of the Pride Cup will be held at 4.30pm

The football ground will feature rainbow colours, the international symbol for gay pride, at the 50m line in show of support for LGBTI inclusion that has been embraced by the teams, local community and the AFL.

In addition, Jeff Kennett, Chairman of beyond blue and former Hawthorn President will speak before the match, and St Kilda Football Club will run an Auskick clinic at half time.

Pride Cup will be broadcast live on Yarra Valley FM and Joy 94.9

March 8th marked International Women’s Day, celebrating women all over the world for their economic, political, and social achievements, as well as showing appreciation, love and respect for women from different cultures, religions and political environments. The day is celebrated across the world with thousands of events such as charity functions, luncheons, forums and more. Events are held to inspire and encourage women, to celebrate achievements past present and future, to come together and unite.

On March 5th the Yarra Valley celebrated International Women’s Day with a special luncheon at the Upper Yarra Art Centre where our own UYCH Corporate Services Manager Robynne Mauger was a guest speaker.  Many women from the Yarra Valley and surrounds came along to be inspired and empowered by women from our own area and share a meal. Our Yarra Valley Community School female students from the Yarra Junction campus also came along for the event; which for these teenagers is a great platform for building self-esteem, self-confidence and to learn to overcome negativity in order to achieve their goals.

The theme for the day was challenging prejudice and discussing life’s moments where prejudice was experienced. Robynne shared her stories on how she dealt with prejudice through the eyes of a woman. In all her life examples it was evident that Robynne built a strong backbone dealing with situations where judgement and prejudice arose. Her day-to-day work and life experiences focussed, and continues to this day, on providing opportunities for people to enhance their lives. She is well placed to open our eyes to ingrained prejudice, to educate the uneducated and empower others to overcome barriers to fulfil their own goals, as prejudice is invisible to the perpetrator; ignorance can lead to judgemental comments and behaviour.

“There are so many interesting people to meet in the community. I came along today to be inspired and to have conversations with interesting and inspiring women, and that was achieved”  – Diane

She left us all with a strong message, especially for our YVCS female students, that to overcome prejudice and to be where you want to be in life and to succeed, you need to ‘Believe in yourself, be true to yourself, don’t take no for an answer and make your own choices.’

Robynne was followed by Tiani Zia-Kane, another prominent and strong woman residing in the Yarra Valley. Tiani also provided inspiration, hope and guidance for all listeners through her own experiences with overcoming prejudice.  Tiani believes that prejudice is judging someone negatively before knowing them and that it’s about inequality. Tiani is also well placed to open our eyes and to educate against the prevailing prejudice we still see in society today.

If you would like to learn more about International women’s day head to: 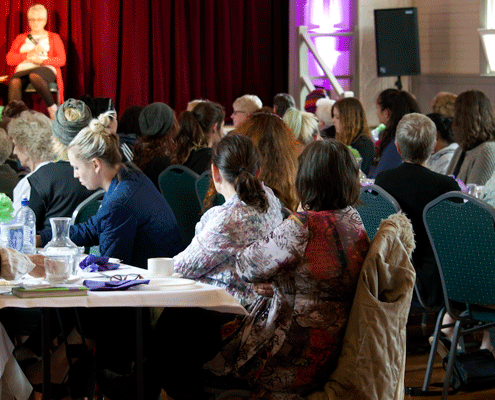 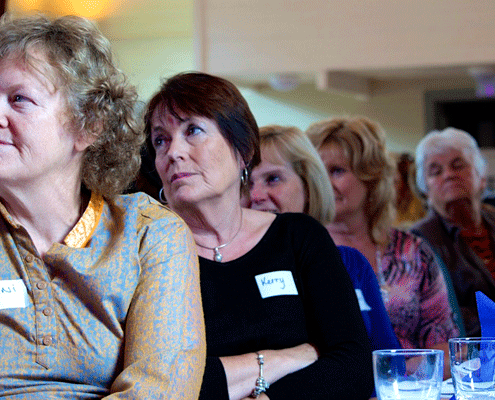 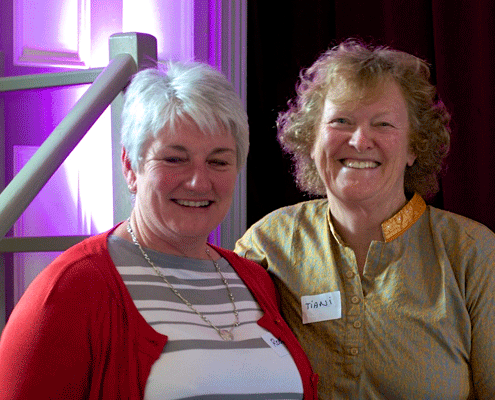 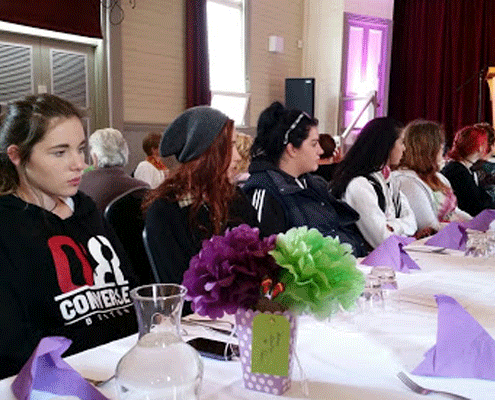 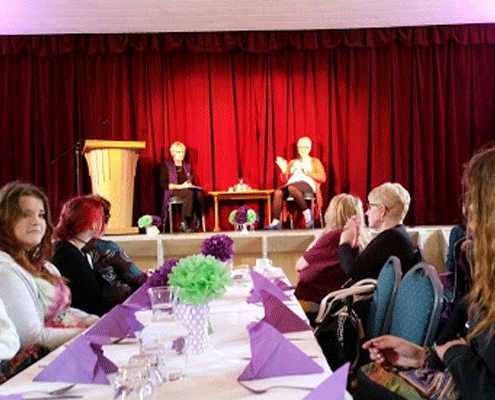 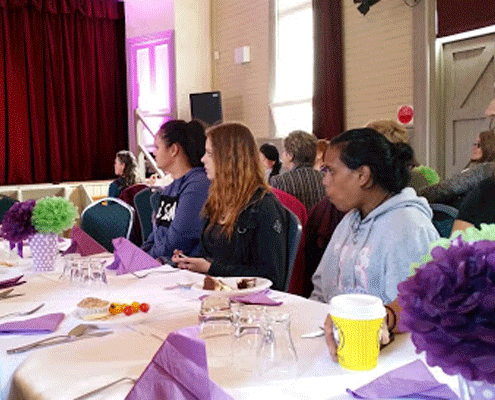