In following her personal mantra of embracing challenges, Cire Community School student Cammy Lilagan has been honoured with the Cowey-Selman Kokoda Scholarship Award.

The inspiring 17-year-old was announced the 2022 recipient at the Monbulk RSL Anzac Day Service on 25th April and may well be trekking the Kokoda Trail in Papua New Guinea within just a few months. 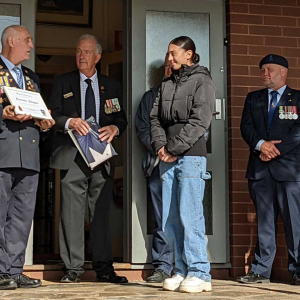 The scholarship is a joint initiative of the 39th Infantry Battalion (1941-43) Association Inc., Mt Evelyn, Monbulk and Lilydale RSL sub-branches to encourage young people to research and understand the sacrifice so many ordinary people made in World War Two to keep our nation free. It is open to Year 11 students enrolled at a secondary school within the Shire of Yarra Ranges.

Cammy took up the challenge of entering the competition, drawing on her love of writing to compose her winning essay describing the importance of the Kokoda Campaign in the Battle for Australia and why she would like to trek the Kokoda. Cammy captured the spirit of the award program, and the hearts of the selection panel with her understanding of the campaign and how her life’s journey to date was the driving force behind her wanting to trek the Kokoda.

“I massively didn’t think I would have a chance, but I was interested in finding out more about the Kokoda Campaign….I was pretty shocked but very happy to be the winner,” said Cammy, who described it as an eye-opening experience and a window to some amazing life-changing opportunities.
“Being involved was a bit of a breakthrough moment for me; something clicked. I just wanted to do this challenge and be stronger for the experience.”

With a love of all forms of writing to create a picture and move people, Cammy crafted her award-winning essay by walking in the footsteps of the young soldiers and experiencing their sacrifices, fears and challenges, and sharing her own life’s journey.
Although Cammy had little understanding of the Kokoda Campaign before the competition, she now believes it is imperative for all young people to appreciate the sacrifices made by those of a similar age who went to war to keep their nation free.

“It is so important for us to all get along, find peace and avoid war….the ugly situation in Ukraine really drives this home.”

Cammy said it was fantastic that Cire Community School encouraged and supported students interested in entering the competition and offered many other opportunities.

She described the school as unique and said words could not “talk up the teachers enough” for their encouragement and mentoring and being “super, super fantastic”! Originally from Healesville, Cammy spends up to two hours each way on public transport to reach the Cire Mt Evelyn campus – a clear demonstration of her belief in Cire.

Currently, she is undecided about her future pathways, but she knows she will be guided by her passions, whichever way they evolve. She counts the Cowey-Selman Award as a huge learning experience and is confident that many opportunities will emerge as a result. She is already looking forward to being an ambassador for the program, which could involve public speaking and presentations, leadership and mentoring.

In the meantime, Cammy is in fine form to undertake the Kokoda trek, with health and fitness being one of her passions.

The Cowey-Selman Award was launched in 2019, but unfortunately, it was suspended in 2020 and 2021 due to COVID-19 and the closure of the Kokoda Trail. It is hoped the trail will be open for the 2022 trek season from April to November.

The award is named after two Yarra Ranges’ residents, James (Jim) Cowey and Harold Geoffrey (Geoff) Selman, who served with the 39th Infantry Battalion in Papua New Guinea.
Jim Cowey MC was born in 1890. In WW1, he served in Egypt, Gallipoli and across the Western Front. In Northern France, he was awarded the Military Cross for gallantry near Hamel on 18th/19th September 1918, west of Bellinglise. He re-enlisted for WW2 and served as a staff sergeant with the 39th Battalion. A resident of The Patch, it is believed that Jim is the only enlisted man to actively serve at both the Gallipoli Landing and the crucial 2nd Battle of Kokoda. Jim passed away in 1968.
Geoff Selman was born in 1921 and served as a private in the 39th Battalion. A resident of Lilydale, he was killed in action at Gona on 14th December 1942. Geoff is buried in Bomana War Cemetery, Port Moresby and remembered on the cenotaph in Lilydale.
https://www.cire.org.au/wp-content/uploads/2022/04/Bolg-banner-Cammy-Lilagan.jpg 500 1200 Cire https://www.cire.org.au/wp-content/uploads/2016/05/LOGO-Cire-Services.png Cire2022-04-29 08:29:212022-04-29 08:42:30Cammy honoured with Cowey-Selman Kokoda Award
Scroll to top
Join our Mailing List