Our senior class worked together to plan a camp to Tasmania for 7 nights in October.  We met a lot of the requirements of our VCAL Senior Certificate by planning all aspects of the camp such as the itinerary, budgets, fundraising, food, accommodation, and risk assessments.  We had to arrive at school at 4:30am to get the bus into the airport for our plane at 7:30. It was so exciting catching a plane with all our classmates! 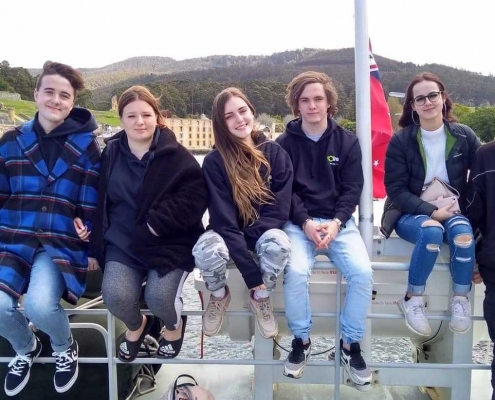 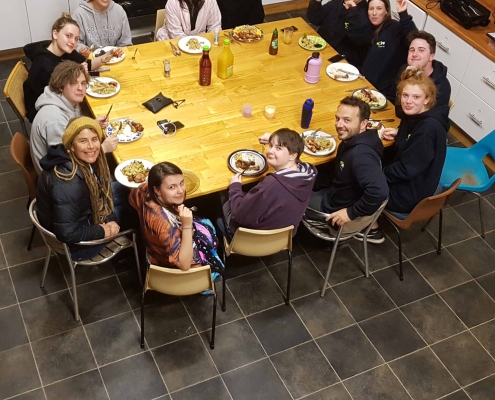 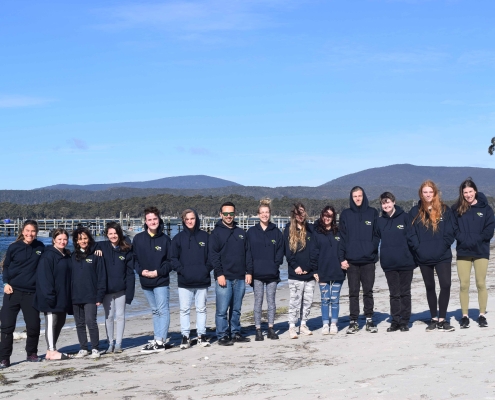 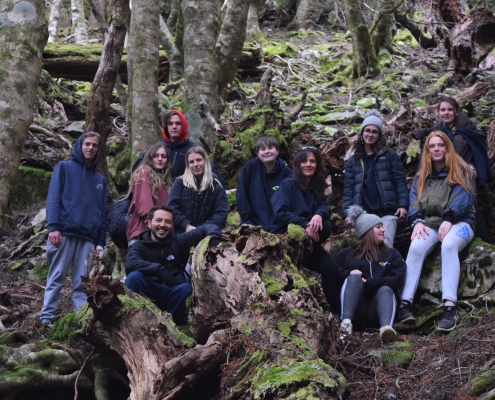 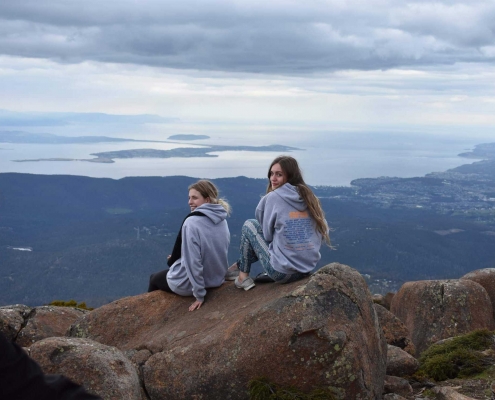 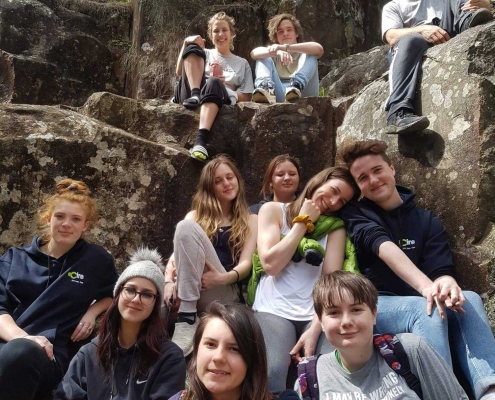 Our first day there was pretty relaxed. Pippa, Mark and I picked up our shopping from Eastland then went to the gym. It was pretty cool that we could attend a gym in Tasmania. On our second day, we went exploring in Mt Field National Park to see some of the beautiful waterfalls we have read and heard about. It was such a beautiful place, I really enjoyed being out in the fresh air. In the afternoon we went to St. Vincent’s in Hobart where we had a guided tour of their facilities including their food van.  We all went into the kitchen and worked as a team to make soup and sandwiches. The food was later distributed by the food van to homeless people near Hobart.

The next day we visited Bonorong Wildlife Sanctuary to feed some wombats and tawny frogmouths, which is an owl-like bird. In addition, we fed heaps of kangaroos. Feeding the kangaroos was a really unique thing to do. Some of the big kangaroos really scared me and kept following me for food. That night we went out to dinner in Hobart to a really lovely little Italian restaurant. The atmosphere was lively and the food was delicious.

The Port Arthur historic site was one of my favourite parts of the camp. I found it really interesting learning about the life of the conflicts and civilians. Seeing how the convicts lived, where they were punished, seeing the churches and hospitals were so much fun. I really had the best day at Port Arthur. We also had the opportunity to go on the boat tour. I’ve never been on a boat so I was very nervous but excited to jump on board. It was so cold and windy when the boat started to move. We were all on the top deck observing all the different islands away from Port Arthur.

That night we revisited Port Arthur to attend the ghost tour. Port Arthur looked very different in the night, you got a very spooky feeling. Some of us were handed lanterns so we could see the path. The tour guide took us to a few houses where apparently there are ghosts. He told us scary stories about the people that had died in the houses then we were able to go inside. While inside the house he told us more spooky stories and half way through a story he jump-scared us, it was pretty scary especially after hearing the stories. I really enjoyed the Port Arthur ghost tour but much preferred Port Arthur in the daytime, definitely a lot less spooky!

The next day we went to MONA. MONA was nothing like what I expected! I expected a normal old art museum with boring pictures all over the walls but MONA was completely the opposite. They had all these cool exhibits with heaps of interactive activities. They had such a weird variety of things but it made it such a fun experience. My favourite bit of that day was a room with random people on the wall singing songs, Chloe and I started dancing around in there. I also really enjoyed playing chess outside with Eric. Half of the pieces were missing so we had to improvise with our jackets, shoes, drink bottles and sticks. It was pretty funny to play with such weird game pieces.

On the next day we left Hobart and drove north to Cataract Gorge and Launceston.  We walked alongside the inner side of the gorge, it was really nice to see the beautiful views. We were able to ride the chairlift across the gorge and visit the other side of the gorge where we saw some beautiful peacocks and wallabies up close. Hayley was even able to feed a wallaby a leaf.

Cradle Mountain was such a challenge for all of us. It was very cold when we arrived, we had to jump on a special bus to get to the top of the mountain. We walked the track, which was a massive 6km hike. Walking along the track, it was amazing to see how different the landscapes were. One minute it would feel like you’re walking through a rainforest, then a rocky mountain and then it would feel like you were walking on a sandy beach. I’m so proud of everyone for pushing through that hike.

On our final day, we went to Gunns Plains caves and had the funniest tour guide ever. His name was Jeff and he made jokes about the crystals in the cave looking like different types of food because he loves food so much. Walking down into the cave was really scary because it was so dark and the pathway was wet. Some parts of the track you had to crawl through because large crystals and rocks were coving the path. I’ve never been able to walk around a cave before, so this experience was amazing.

A few of us were really nervous and excited for the boat ride home. I was really nervous because I’ve never been on a big boat. When we first got on the boat we were all so excited to explore around. We went to an all you can eat buffet and it was the best food ever. I tasted this feta cheese and it melted in your mouth it was so delicious, plus all the salads and mains packed so much flavour. Eric, Chloe and I watched a movie in the cinema later on in the night and it was so weird watching a movie while the whole room kept swaying. When we woke the next day in Melbourne the sun rise was so beautiful to see from the boat and we were all glad we had made it home.

I honestly had the best time in Tasmania. I really felt like our class became so much stronger and we all learned a lot about each other. Some of the things we did really challenged us but we had the resilience to push through and still complete all the activities. I’m so very proud of us. It was such a great experience and I would love to do it all again!

This blog piece was written by Issy Kennedy, a Senior student from Cire Community School. Thank you for sharing your Tasmanian experience with us!

Pedagogy is described as “the study and theory of the methods and principles of teaching” (Collins Dictionary) and Natural Pedagogy is described as “An understanding of our sense of belonging to land, our sense of working with nature. There is a pedagogical shift when you move outside into nature… it’s learning with nature, not just teaching about it.” Claire Warden, Educational Consultant.

The Nature Pedagogy course is run by the knowledgeable and passionate Claire Warden, an International Educational Consultant who has had many years of experience working with children, professionals and in the outdoors. Claire Warden is a recognised author of more than 20 books, has started her own nature kindergarten in Scotland and is involved in many community projects and organisations.

Rebecca, who is the pre-school teacher for the four year old kindergarten group at Yarra Junction campus and Claire the kindergarten assistant, are attending the course to further their ability to implement the natural environment into their curriculum and to learn how to engage children (and themselves) in the beauty, awe and wonder of nature and beyond.

The first two sessions held in March explored concepts like working with hand tools such as whittling tools, saws, files, sandpaper, hole punches and hammers. Rebecca and  Claire learnt how to make cordage, the art of weaving and how to bind materials together using rope/string. They examined a Risk Benefit Assessment and looked at the advantages of positive risk, and how to encourage children to be responsible for their own safety.

“We learnt that when children are provided with the right level of risk in a supervised environment they are encouraged to learn to assess their own skills and match them to demands of the environment. In turn, children are able to think for themselves and assess risks appropriately, subconsciously or consciously asking themselves “how high can I climb this tree?” “Will this log hold my weight?” “Can I jump that distance” etc. Risk is important in developing these skills and furthermore help children to develop resilience and confidence.” Claire Savage, kindergarten assistant.

Rebecca and Claire engaged in discussions about the need to explore the ‘great beyond’ and move past the indoor environment, in order to further children’s understandings of the natural and constructed world.

Rebecca and Claire also explored concepts such as territories, and looked into the art of cubby building and encouraging children to become hands on and advocates in their learning journeys.

Rebecca and Claire have absorbed and learnt an immense amount from the Nature Pedagogy course in the first two sessions and are very much looking forward to the remaining sessions to be held later in the year. These sessions will cover natural elements including sand, mud, clay, puddles, wind, light and shadow, feathers and flight and demonstrate how these elements can be used in an experiential basis in the kinder room or classroom to encourage and inspire learning.

Cire Children’s Services Yarra Junction 4 year old funded bush kindergarten is now taking enrolments. For further information visit our Children’s Services page and also keep your eye our for the Yarra Ranges Kids magazine (due out end of this month) for a featured article on the benefits of the program.

Take a moment to imagine the kindergarten world: letters, numbers, and stories, sharing blocks, puzzles, play, paint and play-dough. Imagination and creativity fills the air. As you talk with your child about their day and celebrate their best effort on the work they do, remember that kindergarten is a “child’s garden.” Many times the process is more important than the product, and learning is accomplished by doing, touching, and experiencing.

Kindergarten has many benefits and plays an important role in your child’s educational journey, these include:

You can find out more by visiting the Victorian Government Kindergarten Benefits webpage.

“Imagine a place where the carpet changes every day, the ceiling is a myriad of different colours, light, shadow and movement. The feelings and movement completely surround you, sometimes breezy, sometimes cold, others warm. Unexpected wonders fly by, sometimes full of colour and sometimes full of noise and movement. If we really want children to thrive we need to let their connection to nature nurture them.” Claire Warden Educational Consultant and primary advocate for nature play.

UYCH Bush Kinder program is based on our beliefs of:

The bush kindergarten program scaffolds the children’s understandings of our local history, Australian folklore and Indigenous culture. It enables the children to engage in outdoor spaces with plants, trees, rocks, mud and water to invite open ended interactions, spontaneity, risk taking and a connection with nature.