Biggest Morning Tea – Alice in Wonderland inspired Tea Party
Students at Cire Community School, Mount Evelyn campus, recently hosted a Biggest Morning Tea, Alice in Wonderland style to raise money in support of the Cancer Council. The event was held by the Personal Development Skills (PDS) cooking class. The PDS cooking group has students ranging from foundation through to senior VCAL level. The students have a great rapport with each other, working as a cohesive team and supporting each other’s work.

The Biggest Morning Tea project was undertaken to meet the requirements for the semester to create, organise and run an event. Over the semester, students in the group had weekly practical sessions making sweet and savoury finger foods in readiness for the event. They worked tirelessly to perfect their recipes in preparation for the event.

There was fabulous encouragement shown to the students of the group with not only Mount Evelyn students attending, but students from the Yarra Junction campus joining with their peers, as well as families of the students participating in the event. The generosity of the students in supporting their peers was in itself a wonderful gesture. One student alone donated $30.00. Cire staff, past and present, joined in the event. Staff at head office didn’t miss out either, meetings had been planned for that day that could not be avoided, so the cooking group arranged for food to be delivered to Yarra Junction, which was met with great appreciation.

Money raised from the Biggest Morning Tea totalled over $400.00, well done everyone.

“I have absolute admiration for the students in the way they conducted themselves throughout this project. From the start of their cooking project through to the end, which was an absolute high, they showed focus and dedication. I am very proud of the efforts shown by Cire Community School students.”
Ian Seppings – Teacher/Leading Support Officer 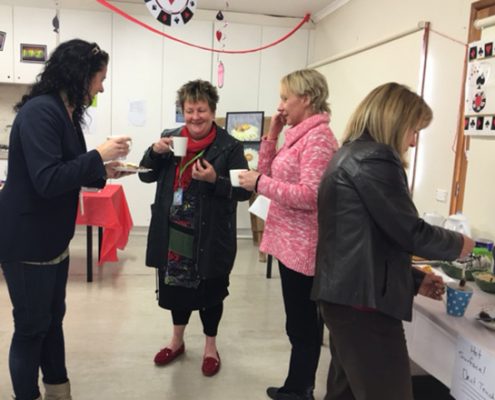 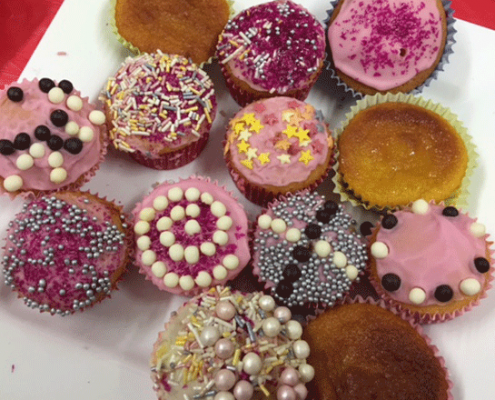 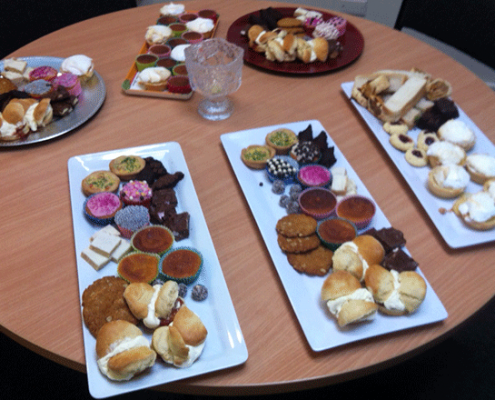 The Australian Red Cross states that breakfast means ‘break the fast’, as the previous meal is typically 8–10 hours before waking up in the morning. Breakfast is important in re-fuelling the body with energy and nutrients, kick-starting the day. If breakfast is skipped, the result can leave a person feeling lethargic and tired and lead to difficulty concentration and behaviour difficulties in the school environment.

Students who have eaten breakfast can concentrate better and have a longer attention span, helping them to learn and study better. They can also perform better physically after eating breakfast as there is more energy available to their muscles. Breakfast can improve behaviour and mood, as children have better concentration and aren’t tired or hungry.

The benefits of the school breakfast program (for students who have not had breakfast at home) are:

The breakfast club started in February 2016 and has taken off with most students helping themselves to breakfast, cleaning up their own dishes and getting to class on time.

Each Monday students are treated to freshly made pikelets. Traditional toppings of lemon and sugar or maple syrup are sampled. The other days of the week students are able to help themselves to cereal, toast, tea, coffee or fresh fruit.

“Convenient and a bright way to start the day” – Lochie

A big thank you to all involved in this beneficial initiative.

A visit to Coldstream Animal Aid (CAA)
Cire Animal Studies Project class from Mt. Evelyn campus went on an excursion to CAA last semester; to learn about how animal welfare in our community as a class can assist them.

The day was jam packed with valuable information on all the great things the CAA do for our four legged friends. Their main aim is to care and provide safety for animals that can no longer live at their homes or because their owners cannot provide for them anymore. Animal Aid runs an adoption program and arranges microchipping, registration and inoculations.

Money is raised from donations and government support, as well as from adoption fees, animal boarding and grooming. It is staffed by volunteers with a few permanent workers; and caters mostly for domestic animals such as cats and dogs, but also caters for small livestock such as goats and small pets like rabbits and occasionally ferrets. Volunteers work in the boarding, grooming, vet clinic, cattery and kennels, promotional events, opportunity shops and on grounds maintenance.

On the tour they saw kittens, cats, dogs, rabbits and goats. The students couldn’t help themselves from getting attached to some of the animals and wanted to take them home. The animals are really well cared for and have plenty of room, stimulation and a happy environment while they wait to be adopted.

Some great initiatives came out of the visit to help them with some of the materials needed for the animals such as toys and bedding. There is a great demand for bedding as the centre goes through quite a lot. The students are discussing collecting bedding for them (blankets, rugs, etc ), as well as making hammocks for the cattery (from second hand baby blankets).

Next term the students are hoping to spend more time with the animals, as they were told about a reading program that a school did with the dogs. Being in the shelter can be stressful for many of the dogs and they had kids come and read to them. It settles the dogs to have someone sitting close and being able to hear the soothing sound of a human voice. They came away with a lot of ideas about how to assist the shelter and build it into the project through next term. 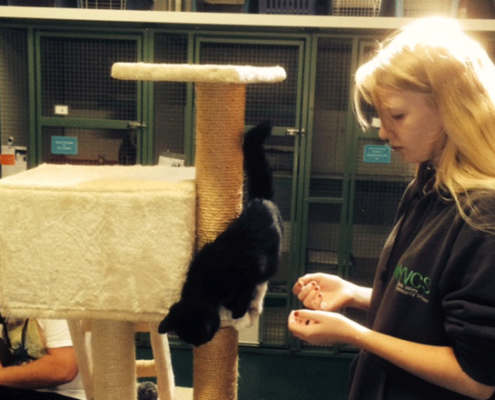 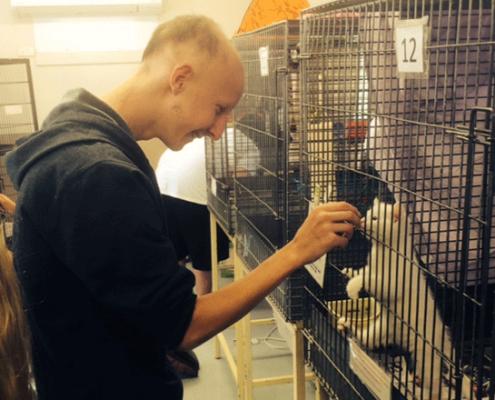 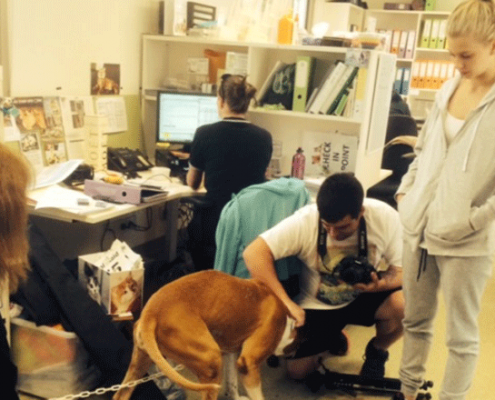 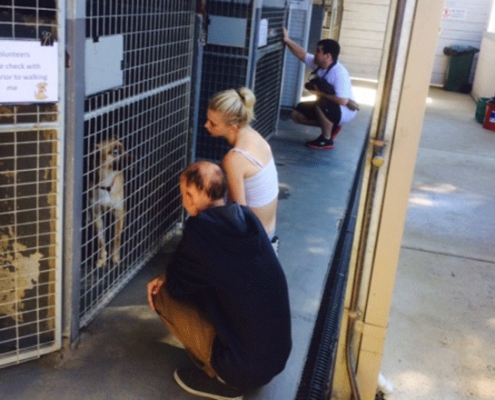 Thanks to the team at the Coldstream Animal Aid for an informative visit that has inspired us to help out.

A trip to Yellingbo to learn about conservation 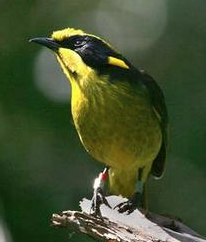 The Animal Studies Project class at the Mt. Evelyn campus  have been a busy bunch. They went on a school excursion to the Yellingbo Conservation Reserve, which protects the critically endangered Helmeted Honeyeater, Victoria’s bird emblem. This species is endemic to the area and is only found in Victoria. The students have been learning about this endangered species from the Friends of the Helmeted Honeyeater and as a class they felt the need to contribute to their conservation efforts. First step was to go to the reserve to help revegetate new areas which can be used in the conservation program.

“The reserve was roughly a half an hour drive away from campus. The roads where mainly rural and narrow; twisting, turning, hilly roads that seemed to roll on forever, with either farms or bushland on either side. On the drive there you had the sensation of being far away from civilisation however your are only 25 minutes from Lilydale.”

Arriving at a large converted cattle shed on the reserve, hidden away in the trees. The students were greeted by a friendly bloke by the name of James Fraser who holds the position of Environmental Coordinator. James gave the class a quick tour of the grounds and facilities. The students were briefed about the animals and plants at the Conservation Reserve. After sitting through a quick OHS meeting the class walked down to a small clearing in a swampy area, which only had grasses growing and there they were informed of the task ahead – revegetation. The students willingly grabbed some tools to dig holes and plants to begin the planting.

The students planted 165 trees and shrubs that will grow to provide a suitable understorey habitat for the rare honeyeater birds.

After all the tree planting and pleasantries, the class was taken on a nature walk where they spotted the endangered yellow helmeted honeyeater bird. It was perched on a low hanging branch, only metres away. James told us the bird was a scout bird which had flown down to see whether or not there was a threat to the colony.

On the way back to campus the students stopped at the Yellingbo Reserve nursery, which is connected to the conservation site. There they saw all the plants being potted; the same plants that they planted earlier that day. Profits made from the nursery provide some of the funding for the conservation work. 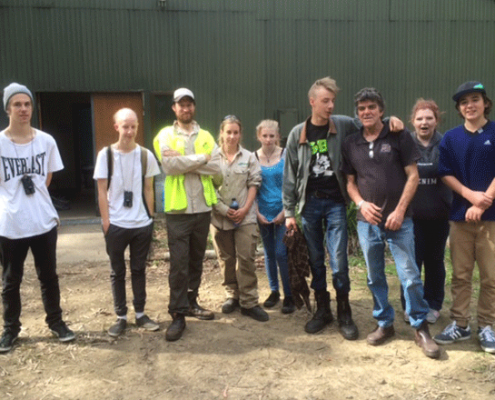 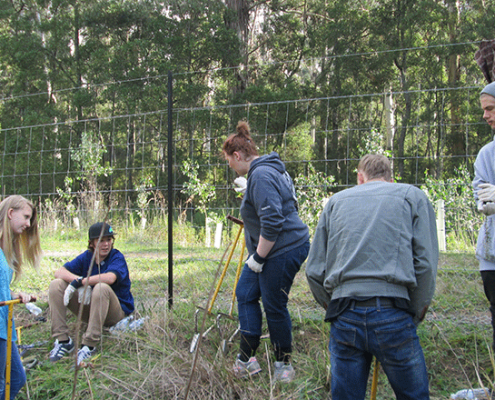 A big thank you to the Yelling Conservation Reserve and James Fraser for hosting this important visit.