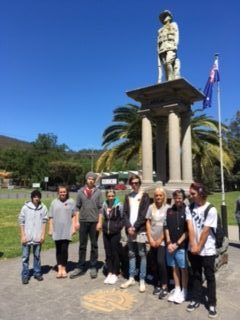 On Remembrance Day this year students and staff from Cire Community School, Yarra Junction campus, attended the 11am service at the Yarra Junction Cenotaph.

“It was a beautiful ceremony to remember our fallen soldiers.” Rebecca Behr, student

It is important for the students to understand and acknowledge the sacrifice of their ancestors and the history of Australia and the world. Attending the Remembrance Day ceremony not only provided this opportunity, it also allowed the students to get involved and feel a part of it.

“I was proud to attend the service today.” Corey O’Brien, student

Remembrance Day, originally known as Armistice Day, commemorates the men and women of World War One, both in the armed forces and civilians. Remembrance Day is held on the 11th November every year as this was the day in 1918 when hostilities ceased.

Nearly one hundred years has passed since the truce that ended World War One, yet conflicts continue to ignite throughout the world. This said, citizens and leaders of the world continue to hold the belief that peace is possible, and continue to work towards that goal.

“I was happy to pay my respects to all who have died in war.” Charlotte Stritch, student

The students were moved by the occasion and went away with a greater understanding of the importance of Remembrance Day.

“The speeches were very interesting. It gave me emotion and awareness of what happened, thank you.” Zabian Jones, student

If you would like to learn more about Cire Community School VCAL programs and educational services click here or call 1300 835 235.