Cire Community School students have responded to a call out from Wandin Rotary for Anzac biscuits for the club’s community Anzac Day Service.

They eagerly bunkered down in the school’s Hospitality Training Centre at Yarra Junction to bake dozens of Anzac biscuits to serve up at morning tea, following the club’s Anzac Day Service at Wandin.

The students were delighted to support the club which has been hosting the community remembrance for about 20 years. Not only did some of them taste test Anzac biscuits for the first time but the initiative also sparked their interest in Anzac Day and its significance and to share their own family’s connections.

The cook up ticked some additional boxes for students studying for their Victorian Certificate of Applied Learning (VCAL), satisfying one of the learning outcomes required for their course. One of the VCAL strands is Professional Development Skills (PDS) which aims to develop student knowledge, skills and attributes that lead to self-development and community engagement through family, social, community and environmental responsibilities; resilience, self-esteem and efficacy; and health and wellbeing. This partly involves responding to a need in the community. Their Anzac biscuits were of huge benefit to Wandin Rotary who hosted the morning tea assisted by Wandin CWA and much enjoyed by those who attended, as well as being rewarding for the students. 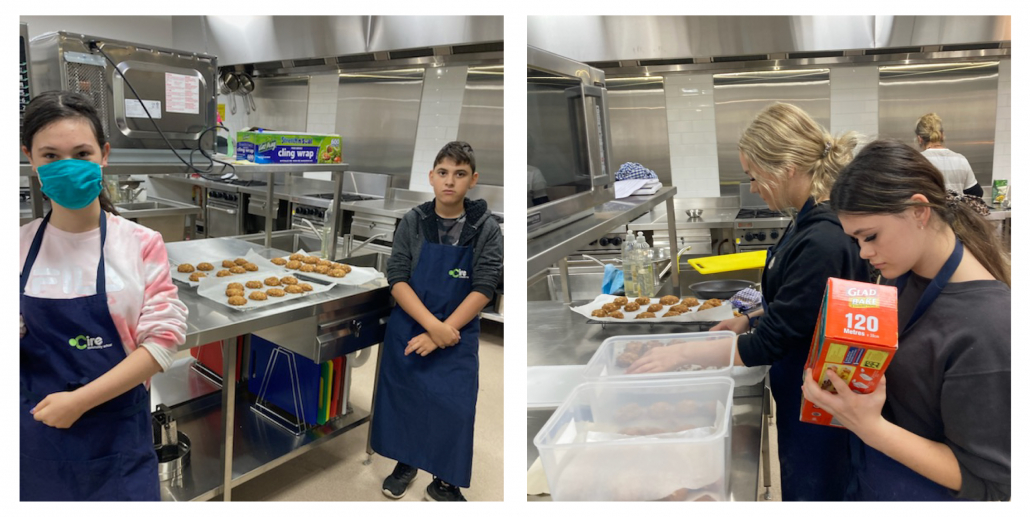 One of the baking sessions was timely for a Middle Years mixed class of Years 7 to 9 students. It provided a real life context to a Maths class earlier in the day as they had to work out how many times they had to multiply the recipe to bake the required number of biscuits, as well as work out ingredient quantities.

“The biscuits taste different but still yummy, said Callum (pictured) who was in charge of weighing the butter.

“They taste great. I hope they (Anzac Day attendees) like them,” added classmate “RD” (pictured)

While the history of Anzac biscuits varies, the following is one of the more popular accounts.

During World War I the wives, mothers and girlfriends of the Australian soldiers were concerned for the nutritional value of food being supplied to the troops.

Food was transported across the sea at a maximum speed of ten knots, or 18.5 kph, by ships of the Merchant Navy. Most of these ships did not contain refrigerated facilities, so food had to remain edible for at least two months. That is when the Anzac biscuit was “invented”, based on the Scottish recipe using rolled oats, sugar, plain flour, coconut, butter, golden syrup, bi-carbonate of soda and boiling water. The ingredients did not readily spoil and were easily maintained. Some soldiers also used crushed biscuits to make porridge.

The biscuits initially were called ”soldiers biscuits” but were dubbed Anzac biscuits after the landing on Gallipoli in 1915.

As the war continued, many groups like the Country Women’s Association, churches, schools and other women’s committees made Anzac biscuits to send to the troops.

Cire Services Inc. is one of the first organisational members of Wandin Rotary Club.

Cire Services and Rotary are strengthening their partnership and reach to help respond to the needs of local communities, particularly younger people.

Cire is one of the first two organisational members of Wandin Rotary which has helped foster a greater understanding between the organisations and how closely our values align.

Recently, Wandin Rotary approved scholarships of $1000 each to two students at Cire Community School; enabled a student to attend the Rotary Youth Leadership Award (RYLA), a6-day residential program focusing on leadership, personal and professional development and service to the community; and is helping drive mock interview sessions to prepare students for applying for employment.

The scholarship recipients were overawed by the generosity of Rotary and the student about to attend the keenly anticipated leadership camp said it was an opportunity she would never have thought possible.
The mock interviews will commence in earnest in Term 3. The sessions will also enable students to discuss their strengths and relate them to experiences with past work or opportunities provided within the school.
Initial feedback provided by some of the students who participated in mock interviews included:

At a broader level, Rotary District 9810, which extends from Port Philip Bay to the hills of the Yarra Ranges, has launched Books for Kids.

The new District Governor, Shia Smart, is driving the Rotary DG Family Project Books for Kids Campaign which aims to identify and fund primary schools that will benefit from being on the Books in Homes program.

Rotary District 9810 together with Books in Homes will provide books-of-choice to children in District 9810 experiencing disadvantaged and low socio-economic circumstances, to ensure crucial early literacy engagement and the development of reading skills needed for lifelong achievement.

The campaign to fund the purchase of books was launched on 1 July 2019.

The more money raised, the more children who can receive books.

The books are top quality and brand new, curated for the program by the Books in Homes Book Selection Committee, made up of authors, illustrators, educators, and parents!

If you’d like to read more or make a donation to this fantastic project please go to Rotary District 9810’s GiveNow campaign page.